Art Nouveau was mostly popular between 1890 – 1910. The jewelry was characterized by soft shapes and lines. Various themes and motifs were used. Insects, particularly dragonflies, were recurrent. The female form was also a popular theme, especially on cameos.

The jewelry was made primarily of gold or silver and gemstones were often involved. Diamonds usually played a supporting role.

By 1910 Art Nouveau had gone out of style, and was later replaced by the Art Deco period. 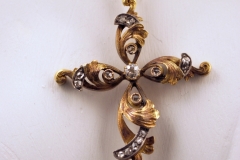